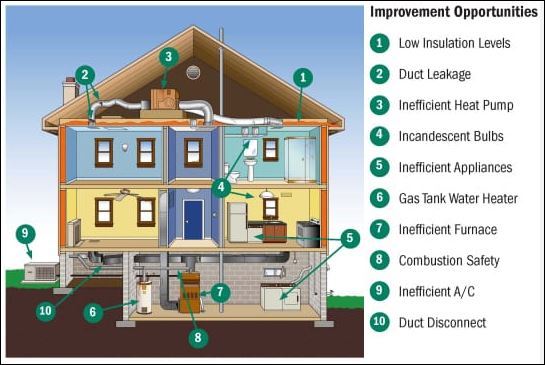 When we moved into our house, the gas boiler was original to the house from 1962. Our first winter gas bill was $650, we were floored. We decided to use Mass Save rebates loans and install a high-efficiency boiler. Our bills are now $200 a month. We also installed more insulation at a 75% discount and later on put solar panels on the house. We feel great about the energy improvements we made to our house.- Liz B

Several years ago we added solar panels to our home. We worked with the solar provider to maintain our desired physical appearance of the house, meaning that all of the panels are on the back roof. We purchased the panels ourselves thanks to tax incentives from the state and federal government. We have seen significant cost savings on our electric bills which have been annually reduced by around 80%. This has been especially helpful recently with the rising cost of electricity. -Kevin

I have lived in Longmeadow for more than 30 years and the house we moved into in 1988 was built in 1957. We are its second owners. And like so many other residents in town whose homes are more than 50 years old, ours had been built when building codes required little in the way of insulation and weatherization. We had our first Mass Save audit in 2013 and we have had 3 more since then. Our first weatherization project was to increase the attic insulation and air sealing: the total for all this work exceeded $2000. Our share of the cost was $125. And we immediately saw utility savings in our gas heating bill and we saved over $700 in the first year; we immediately saved $2575. We continue to save every year since. Each audit has provided additional energy benefits and, even though we are all experiencing increasing utility costs, our heating costs continue to benefit from all of these energy efficiency improvements. We have saved moneyonn our utility bills and by receiving rebates for the work done throughout the years.- Andrea

In 2019 we were finally able to install solar panels. Improvements to these panels meant that even though our house has a good deal of morning shade, we have been able to harness the power of the sun to produce more than enough electricity for our needs. We purchased the 33 panels when Longmeadow initiated the solarization project which allowed a reduction in the price because so many homeowners participated in the project. We immediately received a $10,000 credit from the federal government and we have been receiving monthly checks from the utility company because of the incentive program for owning the panels. We pay nothing for our electrical bill for 10 months of the year. We do pay a small electrical bill for January and February when there is less daylight. So, for the years 2020, 2021, and 2022, we have paid a total of $360 for our electricity. We benefit from LED lighting, high energy efficiency appliances, and the power of renewable energy.- Jonathan